I came to the Nest residency with an artistic practice that has been through a lot to find its current medium. I feel my art has always been harnessed around a need to decode and observe, flip and reflect back a version of life’s archetypal pains through my own lens in an attempt to reckon with it. However, it wasn’t until I ‘found’ more abstract visual forms that I felt I had the means to express the experiences that I couldn’t translate into a linear narrative.

I was no longer aiming for a recognisable form to anyone but myself. Sensory | Emotional | Abstraction. I was starting to sit with the pain and joys of a late-in-life diagnosis of ASD and slowly unpacking the years of seemingly anomalous perception now rooted in a context that made sense. It was around this time I became acutely aware of how disconnected from nature I had become during my landlocked years in Coventry, and began to make a concerted effort to return to what had been my home from home in my childhood of the great outdoors.

I was finding a lot of peace and therapeutic benefits in nature bathing and beginning to form loose notions of taking natural pigments found during such moments in nature, as sort of talismans, and using them to process some of the emotions I’m trying to put on canvas. Alongside this I was becoming increasingly concerned by the sustainability of my painting process and began to toy with incorporating waste such as canvas offcuts and old paint scrapings from my palette into textures on new works.

As a result I craved time and space to really play with those ideas free from the usual financial restraints that come with maintaining an artistic practice that is still developing. I applied for a Nest residency proposing to experiment with recycling painting waste into new works and using these textures to really explore mark making and layering. Talking Birds were kind enough to provide me some time, space and conversation. 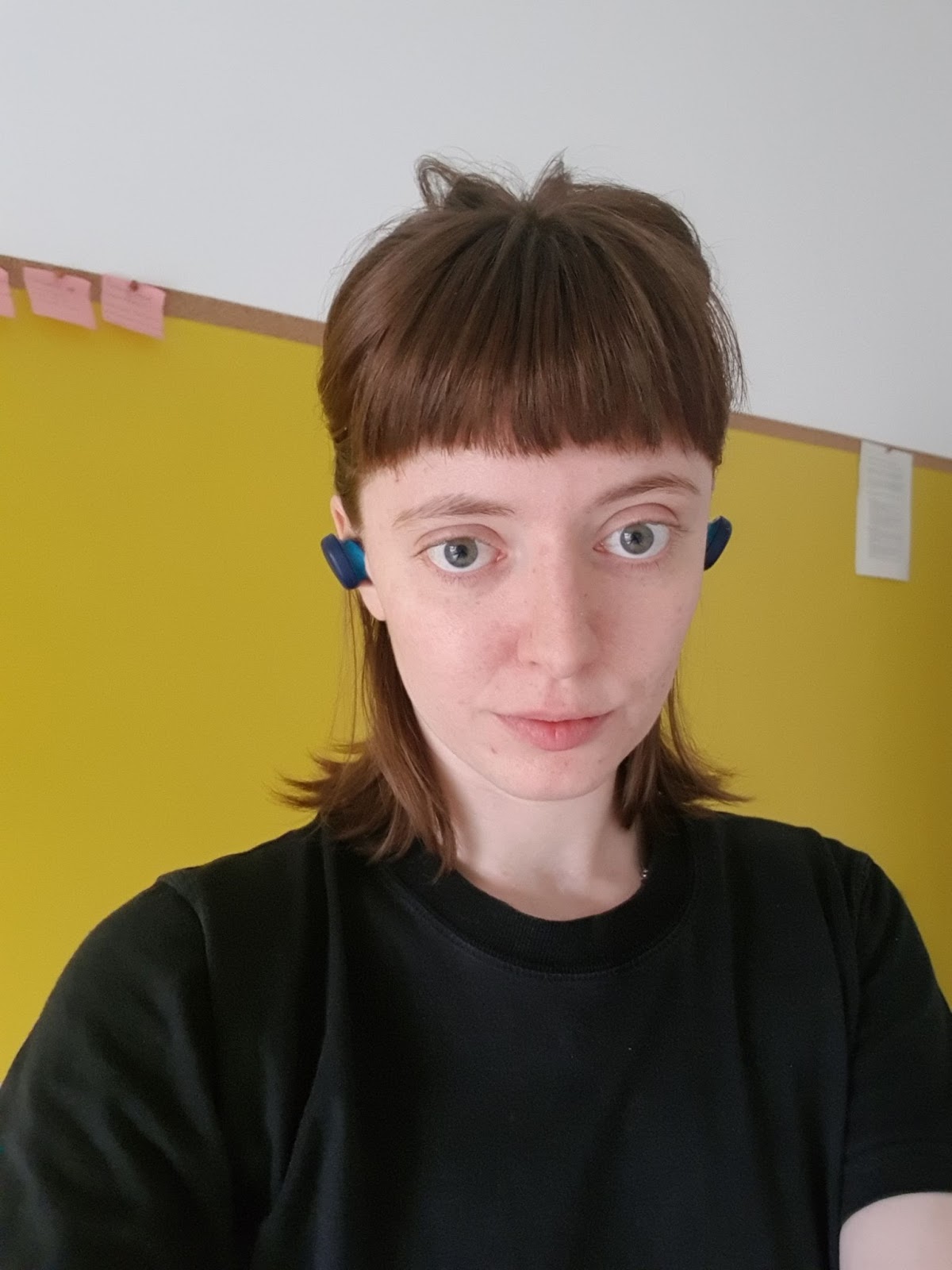 Initially I hit the residency raring, with all the substanceless gusto a naive artist has when entering a new realm. Here I was, with all this time and space to make my own, everything I had dreamed of. I dragged my wares into the studio I’d been provided and marvelled at the rich bright yellow feature wall that would surely act as creative sunshine and nourish my journey from seedling to fully bloomed sunflower.

Time to paint, time to take the 30-odd years of energy that has built up and do something with it. Time to embody the whirlwind of executive functioning that rules my life and bend it to my will.

I could certainly feel the whirlwind. And I was there to paint it. So why couldn’t I tap into it? The wind is an unsettled home from home that I’m all too used to by now, it should be so easy to just open the door. But the door only gave me brief glimpses and hints of the homely scents that wafted through its crack.

So I kept moving. For that is what I’ve always done. Just keep moving. In fact I moved so much during those first few days I don’t think I even realised what I was doing, that I had slipped back into this autopilot, desperately trying to convince myself I was busy, productive, and therefore worthy of this time.

Cognitively I had grasped that this was ‘free time’, mine to use as I wished, but the body remembers. And mine remembered watchful eyes of corporate cultures checking I was on-task. So what to do when the task was to de-task, to move away from blindly running towards an end point and see what I found along the way?

At home, in my spare-room-turned-studio, I had created a little sanctuary in which I could stop, unmask, perfectly cut off from the world and any interaction. The whirlwind and I were a lone duo, conversing back and forth on perfectly squared canvas. With no other bodies to consider in our cosmos all I could do was feel that feeling.

How was I going to do that here? In a new space, that initially seemed so novel to me that it had its own time too. Faster than I’ve experienced. How was I going to work a shared environment back into my practice after having shied away from it for so long? In an attempt to give myself time and space, perhaps I had created a little too much of it.

Two weeks seemed to pass in a singular cycle, one big dawning and sundown. Yet there were pockets of pools in the sandstorm.

I realised I was still aiming for some final image, concept, a palatable and presentable piece.

I was starting to find the patience and tenderness to let myself sit in these pools, striking a balance between thinking about my next move and not thinking too much.

IT WAS OKAY TO STOP.

THE MOST PRODUCTIVE THING I DID WAS ‘NOTHING’.

I actually looked at the work. Not to take photos, not to decide what my next mark would be. To see and hear what happened in the spaces I didn’t try to fill. I allowed myself time to be non-verbal. If a response came I may note it down in mark form, but no pressure.

Sometimes the work was best done in my head, rather than on the canvas.

I’d expected to really spend my time mark making, layering washes and immersed in the painting process like I do when I’m working from home.

I found some cool new ways to make use of canvas offcuts and old dried paint that would otherwise go to waste. I had some great conversations with my peers about inviting others to explore non-verbal and diverse communication in publicly engaged performances. But I found that those activities just facilitated the real lesson, which was in being able to come to my practice from a place of experimentation and play, responding to changes as they occur, organic improvisation, a willingness and readiness to fail, and deal with the sensations should that happen.

Taking my eye away from a final focal point and realigning it to what is in front of me, is when I will see most clearly.

I want to develop this time and space further, and perhaps one day invite others to share that time and space with me, creating a ‘conversation’ around finding other ways of being, sitting and sharing our inner experiences together.